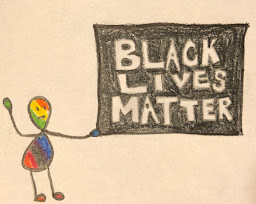 I’m about as white-skinned as it gets.

But when I lost my still-alive white father to mental illness, a Black man—a former mentor and teacher—stepped up to fill that thankless role without even being asked.

There are very few people of color in my current hometown.

But my daughter’s best friend all through grade school was one of them, and her family became my adopted family here.

But the first year and most formative times in my life were spent in the Darien jungle in Panama. There, my father and I were usually the only white people for hundreds of miles, amidst indigenous people, the descendants of escaped African slaves, (mostly) Spanish colonizers, and Chinese canal laborers, and combinations thereof.

My daughter is a U.S. citizen.

But she was born in and adopted from China and is genetically of entirely Chinese descent.

Four rational reasons why I march, why I vote for equality, and why I always do my best to do right by all people of color.

My son and I are neurodivergent.

Just as a Black person may be in danger (or be bullied, or passed over for a job, and on and on) simply for “being in a black body,” my white-bodied son faces discrimination and danger for having an autistic mind. (I “pass” a little more easily, but have also dealt with plenty of neurodiversity-related issues over my lifetime!)

Like most Black parents, many parents of autistic children teach their kids how to behave if they encounter the police. “Acting weird” or “different” is yet another way to “get yourself in trouble”—or worse.

When we—whoever we are, whatever our skin color, etc.—say “Black lives matter,” we are in fact saying “All lives matter, because all people should be equal”;

and we are also saying “We understand that, historically and in the present, people living in so-called black bodies have been, and are being, treated with extraordinary violence and injustice, as if they don’t matter, and we want everybody to know that black lives are of great and necessary value in the tapestry of humanity and we ally with Black people.”

If you’re “foreign,” gay, Autistic, brown, yellow, Black … in short, if you’re colored or shaped or oriented or identify differently—if (in the United States) you’re different from the dominant/“normal” white majority in any way, really—you know what it feels like to have your body and whole being seen in ways that categorize you, that relegate your existence and actions to a lesser status on the basis of a single trait.

Another rational reason why I advocate and ally with ALL marginalized peoples.

But rational reasons, even very convincing ones, aren’t the point.

Dear persons, why must there be a reason behind understanding that we are all human beings?

As such, do we not all have hearts to care for our fellow beings?

I once read about a U.S. senator discussing how he was grateful for the hundreds of thousands of dollars worth of healthcare his sick wife received through health insurance. He spoke of how that huge amount of money would have been a stretch for him without insurance, and how he now understands why people need insurance.

Do the math, senator. For most people, hundreds of dollars, even dollars, in out-of-pocket health expenses would be a stretch. I suppose that’s a rational reason behind healthcare coverage.

But it’s also a heart-centered reason behind caring: Do those less-affluent people care any less about their wives, children, partners, parents—or their own and loved ones’ health and access to healthcare?

Why would it take a direct experience of the need for healthcare to grasp that everyone needs healthcare—and that basic human decency demands that they get it?

Likewise, why would you have to know a [fill in the blank here] person intimately to include them in your species?

Even if we don’t have the empathetic capacity to make such a heartfelt leap of understanding, doesn’t logical reasoning tell us we are all fundamentally similar in the most basic ways?

For instance, I think we can agree that we all want and need the same things:

I might have missed one or two items (and, of course, some specifics for particular individuals), but it seems to me these needs are

Do you believe that other humans are also human?

Do you believe on some level that some humans, say, women, trans people, Black people, Autistic people, and/or members of some other subgroup, are somehow less human than other humans of another group (probably your group)?

OR do you believe that all humans in general* have equal/shared humanity and worth?

If so, whether you came to this conclusion with your heart or mind (or both), do you believe it’s worthwhile, even imperative, to help ensure that all humans have access to the above basics?

Do you accept that some of us have certain areas of privilege (such as being white, educated, verbal, male, financially secure, and so on)?

Can we use whatever resources, privilege(s), and/or power we’ve got to advocate for equality?

Dear readers, I get it: It may feel like there isn’t much you can do in this isolating global crisis. You may feel angry, sad, tired, hopeless. Many of us have all we can handle with work and family alone.

But the world is desperately in need of healing right now, and ripe for CHANGE in ways we may never again see. It’s an amazing opportunity!

Know that every small shift toward inclusion, every friendly and/or courageous exchange between mutually human beings, can have huge reverberations. That means any little steps you can take will make the world better for all of us.

* Of course, some individuals commit acts that diminish their own and others’ humanity. I’m simply arguing against classifying any subgroup of humanity as less-than based on a single trait.

Posted by Full Spectrum Mama at 6:10 AM