Helicopters in Our Rainbow

G had a major project due last week. He was to create a poster to illustrate and outline a presentation on his research on Grover Cleveland. His written report had gone well, mostly because he enjoyed it, but I was concerned about this more public aspect of the work. Difficulties in reading social cues and a lack of interest in appearances, both aspects of aspergers syndrome, sometimes conspire in undermining G’s classroom endeavors.

Here’s a Full Spectrum question: how much and in what ways should we help our children with homework? There is a veritable rainbow of answers to this query. It’s an ultra-regular problem, but when a child has learning differences it feels perhaps even more confusing both vis-à-vis home and school. The spectre of becoming a helicopter parent is never far from parents of many “special needs” children. In school, because G has a diagnosis, some teachers may have lower expectations of him. Luckily this year, his teachers – who are wise, experienced and huge of heart – seem to get my boy.

So, home…and G himself. I know he is capable of doing just as well as other students (and even better in certain areas), but does G know that? Encouraging him to accomplish things on his own is one way he may gain this self-knowledge.

Tuesday Evening: The Project
I gave G some guidance, including drawing up a draft outline for him, in standard outline format (roman numerals, capital letters, etc.). Then I let him complete the poster on his own. Some (vast) part of me wanted to hover over him and make sure he made something that would measure up – by mainstream standards -- to the other kids’ work. But more than that I wanted him to express himself, and hoped it would build confidence and satisfaction to feel trusted and do a good job.

He proudly brought me his poster. He had entitled it, “Uncle Jumbo.” “Good start,” I told him. “Catchy.” He’d decided the day before that our pictures of Cleveland from the encyclopedia were adequate for the final presentation. He had affixed copies of these two small black and white pictures on an angle and his handwriting slanted precipitously likewise. The outline read from right to left. But he had lots and lots of information in there and had learned a lot and had a fine time doing so. All in all, it seemed he’d done a darn good job for a fourth grader.

Wednesday Morning: The Turn-In
My heart sank when I saw the other posters. Straight lines, multiple color photos and computer-generated text abounded. I knew no one could’ve worked harder or more earnestly on their posters than G had, but these looked so, so much more…professional.

As I walked back to my car after drop-off I suddenly realized that other parents must have been giving a lot more input to these projects than I had deemed appropriate. Basically, I had over-underestimated the “normal” level of parental involvement in schoolwork. Between parental non-involvement and helicopter parenting (and beyond) there must be a continuum of genuinely helpful help. I decided I’d missed the mark this time, and that I should’ve at the very least recommended straight lines.


Postlude: Tuesday Afternoon: Pickup
The kindergarteners all walk down the hallway carrying shapes made by linking toothpicks together with mini-marshmallows. Each child proudly bears his or her little diamond or square with the greatest of care.

G and his one friend (who is coming home with us) approach, having noted the marshmallows. I have a cache of vegetarian marshmallows at home and I promise to serve them as snack. I often agree to things I would not otherwise do in order to encourage this rare and precious friendship. Then I further agree -- again, against my best instinct -- that we can go straight home instead of going to the library to download extra pictures of Grover Cleveland for G’s poster (which is due the next day), the faster to eat marshmallows and play.

Next comes Z, sashaying down the hall with the most spectacular assemblage in her arms. Her marshmallow project is in a different universe, nay, a whole different Reality than the others. One of the great aspects of having a child who was adopted is one can really go to town with bragging: “Hey, I can’t take any credit but…this kid is spectacular, eh?” 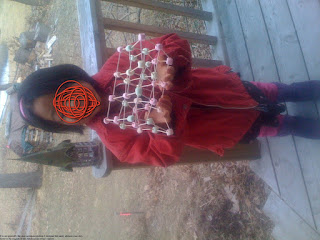 
Hers was by far the most technically adept and visionary marshmallow project in the whole bunch. Z, while extremely clever and quick, is not generally the most assiduous student, so I reckoned the candy element was a key factor in the magnitude and fabulousness of her creation.

Later that evening, as G worked on his poster, I would read his report card to find he has been “off his game” this winter. He has been focusing more energy than usual on social issues – somewhat to the detriment of his academics -- because his one friend is so important to him. Learning to share this friend or to be apart from him sometimes has been a challenge – and a strain on both boys. I would realize that by caving in to not going to the library I had reinforced this trend.

Later that week his teachers would assure me that social tension is, for fourth graders, essentially “normal.” Social learning is something most upper elementary students are struggling to balance with academic learning as increased intellectual demands jockey with more complex social dynamics.

In the end, even after getting a look at the other students’ posters, G felt really great about his project. In the interest of more conventional success, I could have done the bulk of the work myself. Otherwise, even in the quiet, socially unchallenging environs of our home, no amount of friendly cajoling, firm guidance or menacing threats could have gotten G to produce a precision-masterpiece equivalent to Z’s for his presentation on Uncle Jumbo.

Had I only known!

Extremely occasionally, Full Spectrum Mama discovers A Secret to the Universe. This is one of those rare moments. The secret is…Marshmallows. If all schoolwork -- all activities and interactions -- could just involve marshmallows, everything would be perfect. Sweet, soft marshmallows (vegetarian for us, please) could sweeten the toughest endeavor of any child (any person!) – and cushion the frequent falls of every imperfect parent (and other human people).