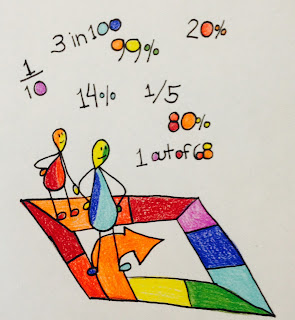 Let's play a game, and in that game the rule is, everything I say is annoying and wrong.

This game is called…The Teenager Game.

Here’s a brief round from just the other morning:

FSAM* [cheerful and encouraging]: G,  if you have to stay the whole period for your test but are done,  why not use that time as a chance to bring up your grades? You know, work longer on the test after giving your brain a little break. Or ask your teacher what other work you can do!

G [ultra-sullen/condescending]:…Do you have to talk to me?

The Teenager Game is pretty exhausting. Like any parent with teens, I often wonder how to get through to them. Almost everything I say to them is, quite typically, met with disgust and dismissal.

By the way, how did they get this “grownup,” anyway?

When I was pregnant and had begun the long process of worry that is a big part of parenthood, an experienced mother of three grown boys told me something that really helped me through my first few years as a parent: “The odds are with them.”

It was such a simple phrase, but it truly carried me through some rough moments. One kid would get croup and I’d be up at 3am holding him or her, listening to what sounded like a death rattle in a steamy bathroom and I’d be scared out of my wits. Then  I’d think, “Jill told me the odds are with them! How many babies have croup right now? Lots! S/he’s gonna live!” With each wee bit of independence or separation, too, I would start to spiral. Then I would remember: “The odds are with them!” It was such a comfort.

But there’s a catch now. The things is, with autistic kids — my son, G, is on the spectrum — the odds aren't with them. Without getting into the precise (very daunting) statistics, people on the spectrum are significantly less likely to achieve all sorts of things that typical people mostly take for granted, like independence, employment, academic accomplishments, romantic relationships, parenthood, health. And kids with behavioral and emotional issues, like those my daughter has struggled with due to her attachment disorder, do so much better in the long term when those issues are addressed in their younger years.

So in this “game” of teenage disaffection, the stakes feel higher in the Full Spectrum household, as they would in any household with differences and disabilities. I have to get through to my teens, since the things most people take for granted will eventually happen for their kids - independence, mental health - are not a given. I have to tread a fine line between accepting that my children are beastly teens, while remaining alert for any signs of impending disastrophes. At the same time, I have to not have a nervous breakdown?!

So how do we improve the odds? Ideally, while not having nervous breakdowns, not breaking the kids, without the kids breaking themselves, and while presuming competence for all, we will also be able to encourage them and help them flourish as the unique, irreplaceable, precious beings they are.

And this isn't a zero-sum game. The more our loved ones with differences are uplifted, the more they succeed, the more progress, acceptance, and awareness for all, right? After all, that’s the whole point of this here blog.

Stay tuned/bear with me as I approach this transition phase, along with my Meeting Friend, and a few other loving yet terrified parents of teens. I will share input from parents and guardians and individuals who have been there as well.


P.S. FSM has received some good press and stuff lately, and readership continues to climb (at 175,000+ as I write!). I was interviewed, about, among other things, activism, advocacy, and parenting a neurodiverse child as a neurodiverse parent here, at this great site that recommends asking real live autistic people about how they feel and what they want in their lives. Also, I am so honored and excited to have been named a "Top Autism Blog for 2018" - Oooh, I just have to share: "Full Spectrum Mama writes in a refreshingly honest style with beautiful rainbow illustrations that accompany her posts. It’s one of the most unique autism blogs on our list."

An InLinkz Link-up
Posted by Full Spectrum Mama at 3:53 AM 14 comments: