May I just say…


…that I am NOT looking to “cure” my son’s autism?

If everybody in the world were more like him, the world would be a much better place.*
That is all.

The Least Popular Kid in the Class – Part Two

At the time of the Least Popular Kid in Class Incident (http://fullspectrummama.blogspot.com/2013/02/the-least-popular-kid-in-class-part-one.html), I tried to get the scuttlebutt on what – besides crying -  happened after G answered the day’s question, but continued to get “stuff” in response.

Chances are, he was genuinely unable to put his feelings into words.  We are neurologically quite similar, and it took me until, oh, last year to realize that where I stand on the spectrum, I tend to get upset before I understand exactly why I am upset (never mind putting those feelings into words!). The overwhelming quality of intense feelings precludes clarity around those feelings until the strong feelings subside. This can be true of overpowering sensory feelings (such as those experienced by sensorially-sensitive people in the average classroom), as well as emotional ones.

Still, knowing that he needed time to process was not going to directly aid G with his lack of popularity, or make him feel better about crying in front of his classmates.

Outside of suspecting it would not be really, really helpful to tell G, “But you’re my very best friend, buddy!” I was at a loss of how to help my child.

So I wrote G’s teacher along these lines:

I love that you start morning meeting with a question. I do the same in all my philosophy classes [read: I am not about to bust your chops for asking big questions]. And I think yesterday's question was a great one. I’m just unclear on exactly what happened after [G] answered the question and then, “for some reason” (according to him), began crying.

When you get a chance could you let me know a bit about what happened yesterday so that I can best support [G] at this time? Or if you have any suggestions...

I know you have your hands full, so at your convenience.

Thanks so much,
[Full Spectrum Mama]

Responding via email, G’s teacher explained that a number of students had been being inattentive or having side conversations while G spoke. Other students had interrupted him, saying that he was wrong about being unpopular. These latter, while acting with good motives, “were not speaking in turn or being respectful to the process.” These factors contributed to G’s frustration.

He assured me that he had never seen anyone be intentionally or directly unkind to G, but admitted that G is often left out or “not paid attention to”…

He concluded with some positive thoughts: “As stressful and unpleasant as it was, I believe that the log jam's been broken and we are going in a positive direction with this very social class.  While I apologized to [G] for him having to go through this situation I also thanked him for giving us all the opportunity to examine our careless and thoughtless behavior and make positive changes.”

It was a great gift to have a broader picture of events, and to be able to engage G in a slightly more nuanced processing of what had happened. Not that any of this is going to turn G into someone who doesn’t sometimes get flappy, or extra-loud, or reveal new heights of dorkitude. It might help him accept himself, though, and that’s more than good enough for those of us who love him.

“Free to be You and Me,” with its messages of inclusion, celebrations of difference and our family favorite song “It’s alright to cry,” has been on pretty heavy rotation in G’s room the last month or so. He seems to be feeling less lonely at school, but he’s still asking to spend recess reading in the library because, for him, navigating the playground scene is tremendously daunting.

Now, over a month out, I think everybody was right: lots of kids grew and stretched to be more inclusive and thoughtful following this incident – but G may still have good reasons to cry in school.

Sometimes, too, he may not even know why he is crying.

What he will know is that crying is healthy and totally, utterly, absolutely super alright: http://www.youtube.com/watch?v=Y52bs0aX6v8 *

Posted by Full Spectrum Mama at 10:01 AM No comments:

This morning I ran into a colleague while having an oil change. I told her I was “pretty excited” about something, I don’t even remember what, because I was just chewing the fat, mmmkay?

“Well, obviously you’re a pretty hyped up person,” she informed me.

And here all these maniacally stressful years I’d thought my hard-won (let’s not call it fake, hey?) positive attitude was coming across as, I dunno, mellow cheer.

Also, my Very Strict Writing Group Overlords have cautioned me that lately Full Spectrum Mama has been sounding a bit “breathless” and overly full of “We Can Do This” attitude, leading to an overall impression that I “have things figured out” and am a “Good Sport.”  Knowing me as they do, they dared to question this state of affairs.

I had a chance to ponder their impressions the evening after our last meeting, as my car overheated on the highway and the Full Spectrum Family’s 3 hour trip turned into 6-plus hours with a special bonus of three roadside diarrhea incidents and one potential car-repair-bill-induced panic attack.

The only Good Sporty part of that whole story was when we finally got to the convenience store and I let the kids pick ANY donut, even though it was well past Dinner Time.

I’m horrified by the possibility of a random reader falling upon this blog and feeling alienated and, possibly, inferior because I come across as a Pollyanna of competence, wisdom and equanimity. Because, do I really have things figured out? No. 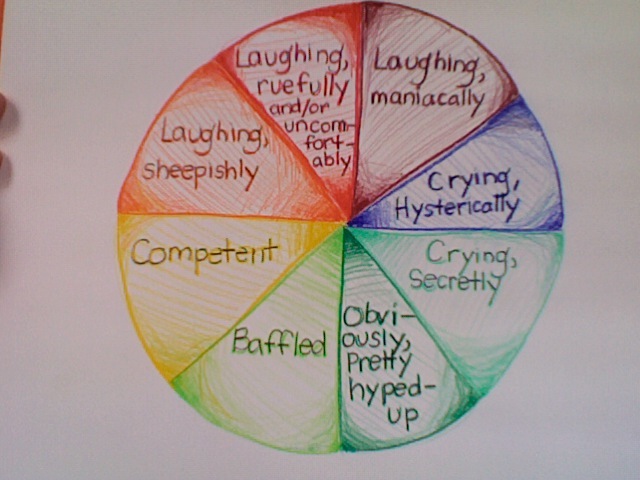