If you have a child or children, do you remember when your first baby was a newborn? Remember that feeling that your life had changed irrevocably and the terror of, well, anything and everything?

Then your child starts to become more mobile and you wonder, what was actually so hard about that baby who couldn’t go anywhere or reach beyond the ends of their arms???

Around this stage, you may also encounter the added bonus of “non-typical development,” which adds a whole ‘nother level to the process.

Next, usually, your child enters the school system and a whole new batch of fears kicks in, right? (People who are reading this from the perspective of the child and not the parent — or from both positions — may even have memories of this time.) What was so, sooooo hard about the days when you could kiss every boo-boo and make it go away? When learning consisted of stacking blocks and finger painting rather than specific and regimented tasks that might or might not be suited to your child’s learning style, abilities, and/or neurology? When social interactions consisted of taking or sharing playground trucks, healthy snacks, and dress up costumes?

And then, really suddenly, people, the end of high school looms. I actually find this next stage of transition the very most terrifying of all (I know - aren't I encouraging?).

Over the years, as I have gotten to know my first child as a human being, my love has grown exponentially from the more-than-I-ever-could-have-imagined level I felt for him as a newborn to There Are No Words.

And, over those same years, my son has grown — but not in the same ways as his typical peers. He was a giant baby, 110th percentile (which means only 1 in 300 were his size), but didn’t talk much until he was at least three. His apparent physical age far surpassed his actual physical age. People would think he was four or five when he was two, and wondered why he didn’t speak. When he was four and we went to China to bring his sister home, people thought he was ten. They laughed hysterically to see this ginormous child in a stroller (it was 104-degrees and walking was sensorially too much).

Now, intellectually, my son is probably quite a ways ahead of most of his peers. Hormonally, he is right on par. But socially, or common sense-wise? He’s far, far younger.

We recently visited friends in Cambridge, and G (16) played at length with an eight year old who is also on the spectrum. The other kid’s parents also had a 15 year old, but we all agreed the younger child was a better fit because their 15 year old was “much older” than G. It was wonderful, if inevitably slightly painful,  to be having this conversation with people who very much approached the whole matter from a perspective of total equality and inclusion.

My love for my second child, my daughter, has grown similarly; and she, too, has grown —  in most ways typically, but she has her areas of difference as well. For example, she was in diapers until she was four years old, which I found exasperating until we figured out that — because she had been in an orphanage — she “needed to be a baby a little bit longer.” When we figured this out, it really helped her to have words for her feelings - and she learned to ask for other things that helped her in this regard, such as being carried or held in her baby sling (she was still tiny well into elementary school).

My daughter’s emotional age seems quite a bit younger than her social age, since she is the most socially-adept and -powerful person I know. Her common sense “age”? A million.

How can we assess and address actual, “real” age in effective, accepting ways?

I recently heard about “the two-thirds rule:” apparently, many people on the spectrum may be seen — as compared to their peers — as developmentally about 2/3 of their biological age. This notion helps in some ways, as I observe my son’s atypical development and hope that he will eventually be able to achieve independence and everything else he wants, much of which seems very far away right now. It makes sense for me, too, since because of my divergent neurology (and perhaps also because of childhood and adult trauma) I only started to integrate and understand some very basic things about life — things most people “get” much earlier — in middle age. But it also seems like a massive generalization and perhaps might also be perceived as a little patronizing. And I don’t think most developmental models incorporate areas in which my son truly excels way beyond most teens, like, among other things, kindness and compassion. 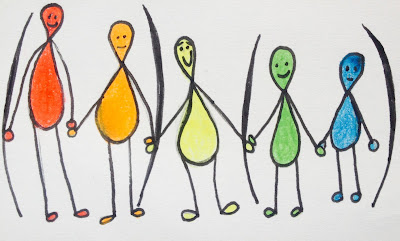 Once again, I don’t have “the answer.” Certainly, estimating age for a bunch of different categories like those I discuss above (intellectual, social, practical/common sense, hormonal, biological, physical, emotional, developmental, compassion/kindness) and then taking an average of these to estimate someone’s “real” age won’t work. As well, every individual is different, and every stage of life is different for every individual…We might well view age as very amorphous and multiple, and even refer to individuals’ “ages” instead of a single age.

What I do know is that it’s important to take a nuanced approach to “real” age. We need to celebrate and presume competence in areas of maturity and independence, build strengths in areas that are still developing, and accept that some of us will always have differences - whether they render us more advanced or less so - in terms of our skills and capacities.


An InLinkz Link-up
Posted by Full Spectrum Mama at 4:00 AM 14 comments: