Pay Attention! To the World!

What are the odds that someone would put on two shirts, one over the other, both inside out and both backwards? Sounds unlikely, no?

Actually, Full Spectrum Mama…what ARE the odds? Harkening back to graduate school statistics, I have in fact calculated the random chances that one would simultaneously wear two shirts inside out and backward (*see below): just over six percent. Yet G seems to wear his shirts this way roughly 60% of the time.

Three seasons of the year here in New England, we layer two shirts for warmth -- but we only wear them once. It occurs to me that the odds might be slightly higher in the case of pajamas: you take ‘em off, they are inside out…You put ‘em back on: inside out. Thus, one ought reasonably to conclude that there might be a higher than six percent chance in the matter of the double-backward-inside-out (DBIO) pajama tops. We wear pajamas for a week, barring mishaps, with double layers on top during the aforementioned three chilly seasons. I have in fact calculated that for each of the week’s seven wearings the daily DBIO odds are as high as 14% (*see below). But I would wager that in the pajama realm we are looking at more like a 90% DBIO scenario. 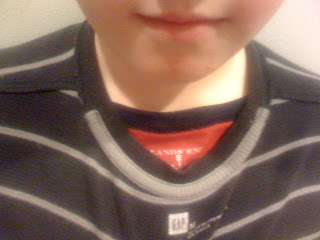 There might be an element of intentionality to this sartorial situation. G invariably smiles slightly when I bring up how remarkable his shirt-luck is…is it pride that tickles him? Or is he sheepish? Is he a rebel with a cause, albeit an obscure one?

You’ll notice I haven’t even mentioned underwear- or pajama bottom-orientation.

If G cares about something, he WILL change it however he sees fit. However he simply does not agree that shirt-orientation is important. He has a point, I know; even so, I would like to see him express his iconoclasm in a way that won’t make the fourth grade girls tease him.

One of G’s earlier, tentative diagnoses was Attention Deficit Disorder. I knew this was completely wrong: he could focus on something he was fascinated by for hours at a time. His internal capacity to concentrate – often on internal topics – sometimes seemed much higher than average. In fact, he’d be near-unresponsive if absorbed in certain toys or a book. That label was discarded for others, deciding not to label, and so on…Some of you will recognize this cycle…In any case, ADD was not a label that stuck.

Caring about something, paying attention, merits awareness about that thing. Here are some other things G doesn’t care to be all that aware of: prestige, the despotism of custom (http://www.victorianweb.org/philosophy/mill/block.html), the coolness-level or age of playmates, sleeping past 5am, order and cleaning of most sorts, safety. Some of these are great (I am never pressured by him to buy the latest trendy clothes, for instance), and some can be challenging. It’s the latter that presents some tough choices for this Full Spectrum Mama. I just wish I could convey – in a way that really made sense to him – those things that would keep him safe and out of harm’s way. Of course emotional harm is a piece of this, but I would start with fundamental survival tips. I have to find ways to make these external things matter to him somehow.

Lately, sometimes several times a day, I find myself holding G’s precious face tightly in my hands and looking right into his eyes. “Pay attention! To the World!” I say. “Please! Look into my eyes and really hear me: You have to be aware of the world around you.”

I’m one to talk. According to an informal survey of “people who walk with me,” I frequently almost walk out into the street at bad times. I (by choice) didn’t get my drivers’ license until my late thirties  (there was a two-week driving salvo in my early twenties that ended with my vowing never to drive again). Granted I am a native New Yorker but it was more about self-limiting: it struck me as neurologically overwhelming, what with all those Factors (Directions! Other drivers! Turning!)! Driving was neither something I thought I would do well or enjoy, and I didn’t start to try until it became an incontrovertible necessity.

Obviously, I am not the world’s finest safety representative. As well, I never thought I would be a bastion of conformity-recommendation but here I am informing my son, “This is the way people do things” (i.e. wear shirts). On the other hand, daughter Z is all-too-aware of her surroundings and of “normal” ways of doing things. It probably goes without saying that she dons all clothing 100% correctly, 100% of the time.

One notion I had when starting this blog was that a useful parenting idea that holds true for Both of my two disparate children might be a useful parenting idea (not suggestion or rule, just idea!) for ALL parents. The topic of paying attention does not seem to generate any such overarching ideas. Here, I parent a very Full Spectrum-Of-Two. For just one example, take driving: I actually believe Z could be a safe and reliable, if, one might say, potentially “strong on the offense,” driver at age six, while G (and, perhaps, I) would best be served by using public transportation in perpetuity.

Balanced attentiveness to what’s inside and what’s outside is not a given around these parts. Manifestations of focus -- chosen and not-chosen, obsessive or “normal,” healthy and less-so – vary widely in our family.

The ways we (all of us) apportion attention are strikingly different. Children with different attention styles need at times to be parented in different ways. How? Hmm. I do at least maintain that the practice of paying attention to what our children and we ourselves are Paying Attention To is important, especially so when we are not dealing with “neurotypical” or “psychotypical” individuals.

When I am giving some version of a Pay Attention Lecture to G, I become -- on my better days -- aware that Z is listening. She is an excellent listener, regardless of whether she chooses to agree with what she is told. I want to say to her, “NO! Not You! You need to pay LESS attention to the world and more attention to your heart and to let go a bit!”

Therefore, there is a one-in-four chance of randomly donning a shirt backward and inside out (BIO). So for two shirts, since options are not mutually exclusive (vs flipping a penny, for example), we multiply. The chance, then, of wearing two shirts in this way on a given day (DBIO, again, assuming one pays NO attention to proper shirt wearing) is .25 x .25 or .0625. Just over six percent.

As for the pajama-calculation, I estimated with a higher, set rate of inside-out chancedness. In seven possible dressings, I generously eliminated the right side out option for Four, but retained the backwards/forwards measure for those days, resulting in the following calculation: (.0625 x 3) + (.25 x 3) or .1875 + .75 or .9375 for overall chance of the DBIO Pajama Top. I divided this by 7 to get your average chance on a given day: .13392857 or about a 14% chance. From this we may conclude that for a week, random incidence of DBIO-shirt-wearing would be almost assured (93.75%), and not out of the question on any particular day.

Hi! If you are still reading this you might want to ask yourself some questions. Hey, I’m the one who *wrote* it…Just saying.
Posted by Full Spectrum Mama at 8:06 AM