Many people worry. I don’t remember worrying much before becoming a mother, but back then I used to, how you say, “sleep.” All parents worry, I know. To be sure, we all have different worries -- but one thing we do share for sure is a novel and intensified capacity for terror. It’s almost as if when we become parents – however our families are formed – many of us develop an extra mental organ (or augment the one we already had) …Let us call it the extrapolator-catastrophizer gland.

The frenzied activity of this new (or newly expanded) organ is certainly enough to lead to a wide range of emotions, or what Pardner and I refer to as WROE (pronounced “roh”). After all, our children are our hearts walking around -- outside of us! -- in an uncertain world.*

I imagine the average parent shoves elements of many of the following sorts of concerns into their extrapolator-catastrophizer gland:

Some parents with “special needs” children might consider themselves lucky or wish to have these concerns, rather than worrying about, say, whether their child will ever walk or read or live a full, satisfying life. Some parents of children who inhabit areas of the spectrum other than “normal” may share these “normal” concerns, too, of course. In any case, although all parents -- and some people -- share this capacity for worry, I have to speculate that the extrapolator-catastrophizer gland of parents with “high needs” or “special needs” children may be slightly more taxed than average.  But let’s explore this assertion – because I am not actually sure it is true. 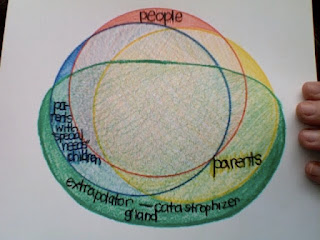 Above, we see the scientific, spectrum-based proof that we all share more than we differ. I think within that context it becomes acceptable and safe, even useful, to make distinctions.

Relativism makes the Ethics teacher in FSM nuts. Of course context has weight, but some things just are right and wrong. Sure, everybody has their troubles, but some things Just Are harder than others. I have friends who are raising children who may never talk, never interact…who try for not days, not months, but Years to communicate with their child(ren) and cannot get through…and they keep trying. I have friends who are raising multiple, non-typical kids on their own on practically nothing. I have been a single mother. I have been broke. I have been a single, broke mother of two extraordinary and challenging children. I’m neither broke nor single now and it’s just plain easier. I am not saying it’s better, necessarily, but on a purely practical level it is, without question, more easierer.

My dear friend Noodle has two children. Her son is a well-adjusted, neurotypical, socially at-ease, sweet, lovable dude, and her daughter is a brilliant, non-neurotypical, evil mastermind, Goth genius, Feminist Riot Grrrl artiste. Noodle says parenting her daughter is simply exponentially harder. She worries about her more than she does her son. Period.

This may be partly because there is more material for to fret. For example, when your child is neurologically inward-focused, you tend to catastrophize about basic practical matters – safety, hygiene, self-sufficiency. When your child is delayed in developing a superego (a.k.a. conscience), you tend to extrapolate to larger potential dirty deeds. Think “Mean Girls.” Think Enron.

These concerns do not just regard individuals or families, but society as a whole. For instance, in a piece on last week's "troubling" new CDC figures on autism (1 in 88 children today is on the autism spectrum; 1 in 54 boys) commentators on today's "On Point" (http://onpoint.wbur.org/2012/04/02/autism-numbers-skyrocket) discussed some of the challenges in parenting "special needs" children and the need for supporting parents, children and communities now -- and as these many, many children make their way into adulthood.

On the other hand, there are people with traditional two-parent families, good job(s), plenty o’ dough and neuro- and psychotypical children who are consumed by angst.

Maybe the size of each individual extrapolator-catastrophizer gland is set – and we each worry according to its putative capacity. Or, most likely, there is a Full Spectrum of extrapolator-catastrophizer tendencies as well. If, for any given individual, we take into account the specific activity level of their E-C gland and their actual life concerns as input I think we are going to need a matrix here. 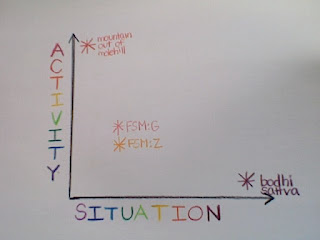 My worries about G being able to live the life he wants to live and Z not becoming a grifter feel like they would fit into that matrix in a reasonable spot. I hope that Z will allow herself to feel and not just Rule, but I don’t worry over her popularity or job prospects.  I hope that G will develop a capacity to Pay Attention to the World, but I don’t waste time worrying over whether he is a sweet, honest person.

My worries are not entirely coincidental with the most regular concerns, but they are also distant on the spectrum from both mountains-out-of-molehills AND the concerns of those who deal daily with challenges much greater than mine.  It’s a decent place to be, all things considered, so let’s proceed from the pity party to the party. I suspect laughter may be the key to moderating the effects of an active extrapolator-catastrophizer gland.

Want to make me laugh? How's about a game of “would you rather…”

Would you rather…eat frozen moose poo shavings*** garnished with your choice of grubs (mashed, guts oozing [but, possibly this is good, dead] or live and writhing) or do a modern dance interpretation of your favorite poem in front of all of your facebook friends?

Would you rather…eat a puss-smeared band-aid that you found on the subway floor or drink dumpster juice from the bottom of a smelly kitchen dumpster that has been out in the blazing sun?****

Would you rather…be stung by an angry hornet or drink a cup of sour milk with a straw made of a rotten old bone?

Would you rather…have the kids you have – with all their challenges and quirks and catastrophizer-extrapolator exacerbating facets – or some other kids (or no kids)?

Would you rather…be yourself or someone else? Live now or in the future…?

* Thank you, Elizabeth Stone, for putting this concept into words!
** I love this quote re: friends from Ask Moxie (http://www.askmoxie.org/2012/03/qa-helping-your-child-develop-confidence-and-become-a-friend.html): “I would go through another 10 unmedicated labors, 20 bouts of mastitis, two solid years of potty training, and an infinite number of sharp jabs to the kidney in the middle of the night if I never had to worry about my child making friends.” Thanks, @Elysia, for the reference.

***"Humorous" moose reference: quite likely evidence of living too long in Vermont.

**** This entry courtesy of a reader with a very sick mind. When I asked, merely in passing, if she had any good new “would you rathers” her response could barely be contained in an email.

Posted by Full Spectrum Mama at 8:33 AM