A good friend texted me the other day to say her son had called someone a “midget” and that didn’t seem right to her. Did I know a better word? I didn’t, actually. I wrote back:

Oh dear. With these things I think the Most important thing is what the person him or her or their self wants to be called…Person-first language was/is a trend (person with autism, person with dwarfism...), but that hasn't entirely worked out either. I've heard "small person," but - ? Complicated. Pretty sure “midget” not good tho...

Have you read Americanah by Chimamanda Ngozi Adichie?

The startling revelation in this book, for most people, is that being black is a thing in the United States in a way that it is not in Nigeria…We grapple with race in this country in ways that some other countries don’t, because of our terrible history of slavery, because of demographics, because of ongoing racism…In other places, other characteristics separate or unite people! Sometimes communities even form over shared differences - neighborhoods or meetings where people share certain qualities that may alienate them in the mainstream of a  given context.

Being different is an issue only because, while we all live in somewhat diverse environments,  there are in every environment traits that most people share or that are considered “the norm,” such as heterosexuality, “typical” neurology, “white” skin, “black” skin, cys-gender identity, biological-family formation, “typical”family structure, “typical” ability, shared nationality, and so on…

I see people noticing how random and inherently unimportant such aspects of people are; I see people celebrating diversity; and I see people trying to approach differences with more sensitivity. 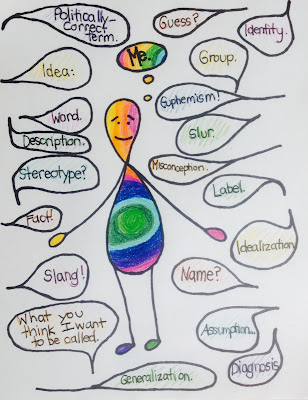 Parents of children with differences or people with differences are sometimes seen as “experts” on difference, but mostly we are just used to being thoughtful about such things in ways that can be new to some.

So here’s my main suggestion: ask.

Ask people what they want to be called.

If you can’t ask, do the research to figure out the most respectful way to say what needs to be said.

Mostly, just try to see people as whole people, rather than reflections of a particular aspect of their being.

P.S. Even “Voices of Special Needs” might be taken as offensive by some: who is speaking for whom, and why are these needs “special?” As a neurodiverse person and a member of a family formed by adoption, I speak out about these topics as someone who is fundamentally enmeshed in such identities and speaking from personal experience only; I share our experiences in the interest of spreading understanding and awareness and inclusion.