A few weeks ago, I really messed up.

I’m on my own with my kids all weekend every weekend and sometimes I get impatient or overwhelmed.

Often, though, we have a really great time together.

Because I’ve always been a solo weekend parent, my children have been forced to accompany me to concerts, museums, and so on. And I’ve watched more kids’ movies than I could count, some of them actually pretty good.

On this particular Saturday, my son, G, who is a junior in high school, was really getting on my nerves with a couple of exaggerated teenage slob behaviors that are not developmentally typical for an older teen.

It’s not that the things he does actually bother me per se, it’s that I worry he will do those things out in the wider world—and get shunned for doing so. Or made fun of, or dismissed in ways he won’t even be aware of…

I was having a stressful work day, too (I edit a Sunday political mailing on Saturdays, but I also freelance and, when things are going well, often work weekends).

But mostly it was just the relentlessness of G’s socially unacceptable behavior that was sending me back to the days when I worried if he’d ever function at all in “the real world.”

Meanwhile, we were all looking forward to going to a big action movie that night.

Around 5 o’clock, I told G that we had one hour left before we’d have to leave for the movie. I asked him if he could stop being offensive for that period—and warned him that he would not be invited to the movie if he could not.

As we were putting our shoes on, G was unable to contain himself from doing exactly what I’d asked him not to do.

And I lost it. Visions of his future as an outcast (never mind that he’s the sweetest guy ever) flashed before my eyes as I berated him and sent him to his room.

Now what was I going to do? After all, I don’t usually leave him home alone, and my daughter was dying to go to the film.

I sat down on the couch with my head bowed.

I tried to breathe deeply while I debated between consistency/follow-through and wanting to get a break/have some dang fun.

I wish this was where I’d come up with a great solution.

But it was time to leave!

Without much clarity, I yelled up to him, “Okay, come on down. I’m not happy about this but Z [daugher] and I really want to go to the movie.”

“I want you to know I’m still REALLY upset with you,” I added. “You only had to keep it together for ONE HOUR! And you couldn’t. So don’t talk to me right now!”

We drove into town in silence, parked, and began to walk to the theater.

As we approached Main Street, we began to see teenagers in formal dress.

It was Junior-Senior Prom Night.

For weeks, G had been trying to get someone to go to prom with him. He’d asked every girl he knew and even posted a request for a date on Instagram.

A week before, he’d finally given up. And I’d forgotten. But I’m sure he hadn’t.

In fact all day, as he’d acted out, he was probably thinking about prom and wishing he was going.

So, yeah—my heart sank.(Yes, I know my heart “breaks” and “sinks” quite a lot. It’s just like that more often when your child  has special needs. Yes, I do know what I’m talking about, as I also have a neurotypical child. My daughter also has special needs—having developed an attachment disorder before she was adopted—but she will have a much easier time being accepted, achieving success, and getting what she wants out of people and life in general. So my heart simply doesn’t break so much with her.)

Why couldn’t I have been more understanding, more compassionate? Presumed competence on his part and given him the basic respect of assuming he has his own reasons and concerns?

Why did I focus on a superficial thing when my son's heart is huge—and vulnerable?

Are there other lessons here for me here about raising an extraordinary child? About supporting rather pushing him than through his challenges?

In any case, I’ll think twice about making assumptions. And losing my temper. 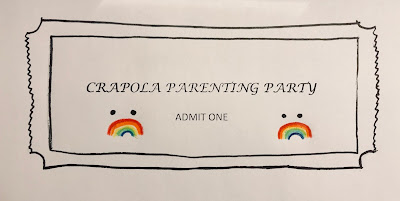 You are invited to the Inlinkz link party!
Click here to enter
Posted by Full Spectrum Mama at 3:41 AM