Teaching My Son to Ride a Bike

We recently had pizza night with Noodle, her partner and her partner’s children.  The four children are a rare good match: two powerful gals who are willing to share their power for the sake of fun and two gawky boys with no (G) or low (friend) eye-rolling urges. (G’s friend is a lot younger, but G doesn’t give a hoot about age.)

After a brief – but non-cruel – period of incredulity over G’s inability ride a bike, G’s friend – wisely, I thought -- offered him his scooter. Friend rode his bike up and down the street while G attempted to scoot alongside. After trying the bike, very briefly (and, one might say, fruitlessly), G wondered if we might get a “bike like this one” instead of the larger one we have been using to try to teach him how to ride for the last several years. I had that quick sinking feeling of worrying about the cost of a new bike, but answered immediately that we would do so.

The very next day, we were driving along a country road and saw the perfect bike with a “free” sign propped up against it.  We popped that bike in the car faster than you can say “Our motor-challenged boy with aspergers is willing to try to learn to ride a bike and, goldang it, we are going to Do This!”

Pardner pumped up the tires and we were ready to start.

I have been trying to teach G to ride a bike since he was really little for so many social and physiological reasons. Bilateral movement, increased proprioception (a fancy word for self-awareness in space), basic balance-improvement, focus, self-esteem, not getting crap from other kids, and general fitness are just some of the likely benefits. I have been dismally unsuccessful.

When G gets on a bike, he gets distracted. He looks down, losing himself in the turning gears, or the patterns on the road. He leans all his weight on me, making no apparent effort to balance. He is incapable of steering and pedaling at the same time. He forgets to leave his feet on the pedals if I tell him to try his brake. In fact, there are way too many factors to take in when on a bike and – At The Same Time! -- on a street. For many years it seemed like he would never be able to ride a bike. I understand: in an earlier post, I mentioned that I didn’t really learn to drive until my late thirties, largely for similar reasons. Sensory overload and safe, direction-oriented navigation don’t necessarily go together.

“I think this is a good time to stop,” G kept suggesting; but noooooo: Mama pushed on until it became obvious that we were getting nowhere fast.

We veered gracelessly into the driveway. G’s little face was all crumpled up. I asked him why he looked so upset. “You were yelling at me every time I made a mistake!” he wailed, and then began to sob.

My stomach clenched. I tried to explain that I was raising my voice because he wasn’t listening and that I was sorry he felt hurt. And -  “Yes,” I had to finally admit,  “I was frustrated.” It’s just a bike. And yet it isn’t.

All the things that will be harder for him than they are for other people, all the extraordinary safety concerns one has for someone with zero common sense and oft-scattered attention, common and less-common fears...all are triggered in this bicycle-riding cycle.  Plus, there was me sticking my feet under his tires periodically, which was kind of annoying to both of us.

There we stood, both holding on to the offending object, a rusty, dirty, old black bike that still smelled for some reason like manure despite a good rinse. Both shaken.

Z, nimble and chock full of sense, watched us warily. She had been riding behind us on her bike, balancing alternately on each side of her broken training wheels just for the heck of it.  If there is a bike riding spectrum, once again we see a Wide Range in this family. She seemed confused by these clumsy, sappy people.

The good thing was, though, that after a recovery period he got back on that bike. And we are still trying.  It doesn’t seem like a “never” now, it seems like a “someday,” even if that someday is far away. Not only that, I dare say we have begun to have fun in the process!

Plenty of people don’t ride bikes. No biggie. But I very simply and not-so-simply want G to be able to ride a bike if he so chooses.

I would, quite frankly, prefer that he not ride a bike unless absolutely necessary (and only with me around) – much as Pardner feels about me and driving – but I want him to have the option. 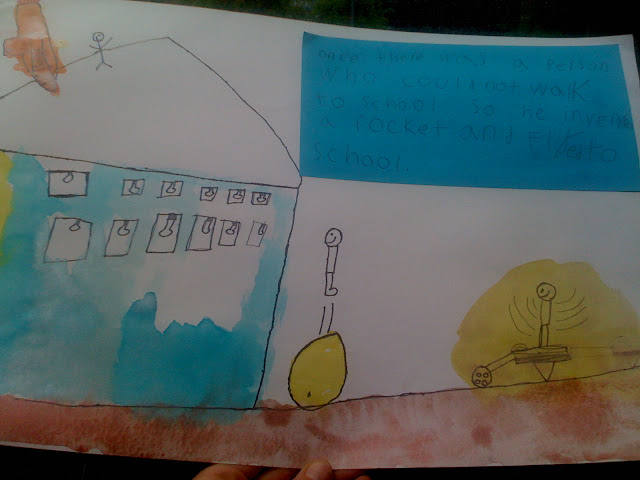 The text on this painting reads, “There was a person who could not walk to school so he invented a rocket and flyed to school.”

G knows that he is different – neurologically, physically – from the kids in his class and beyond. This painting gives me hope that he knows that for all the things he does differently or cannot do, there are things that he can do that are more magical and more wonderful than the ordinary. Even if G never does learn to ride, I know he will find ways to make his journey.

Posted by Full Spectrum Mama at 9:01 AM