We visited Great Gram in North Carolina for school vacation week. Although my beloved Gram looks to me like the most beautiful person on earth, the children were naturally wary of the old, bony lady lying in a “rest home” bed. G had grown up knowing her well, but in more vital times; she’d been declining since Z’s arrival home. After adjourning to the hallway for a wee chat – to wit, FSM hissing, “I know she looks a bit scary but she is your ancestor and neither of you would be here if not for her and she loves you even if she doesn’t always know who you and this will probably be the last time you see her so get in there and give her a hug!” – a decent amount of sugar ensued, after which we set out to explore the area.

Traveling with G and Z seems to exaggerate some of their atypical ways of coping, simultaneously highlighting their anxieties and differences while drawing out their remarkable dual propensities for joy. I kept noticing how -- despite Pardner’s and my sometimes near-constant admonitions (to “not hug strangers,” to “not take your clothes off here,” to “listen and allow the tour guide to speak…” (at the International Civil Rights Center & Museum - http://www.sitinmovement.org/)  -- both children possess a huge capacity for laughter and making things fun.

Of course, being my Full Spectrum babies, they express this in their own special ways. In an unfamiliar environment, G copes with total pokemon immersion, embodying different personae for each situation.  Self-regulation in terms of appetite, sleep and so forth go out the window, and parental regulation becomes more crucial. He rises above largely by crafting pokemon-based jokes at every turn.

Z copes via incessant planning, especially of destinations and menus, as well as by recruiting any likely candidates (candidate pool: anyone who thinks little girls are cute) for unbridled, extensive conversation and free samples. Regulation of environments – social, internal, spatial – becomes paramount. She lightens up, though, with abandon -- and a scurvy belly chuckle for her brother’s every pokemon joke.

This tendency toward enjoyment – heck, let’s call it Play -- was delightful to see. It functioned, too, as a counterbalance for my realization that my children have a great deal to learn if they are ever to function well outside of their comfort zones.

In our Full Spectrum, strengths and weaknesses are integrally connected. Case in point: We are driving around and realize we have gone the wrong way. Pardner announces that he will have to make a U-turn. Z announces, in her inimitably regal way,  “I don’t want to make a U-turn. I want to take a ME turn.” We – all of us -- laughed about this for the rest of the trip, even though the fact that it was actually true for Z was mildly disconcerting.

Now that both children are in school, spending twenty-four hours a day together was freshly grueling and amazing. Each late night would find Full Spectrum Mama and Pardner lying on the bed staring vacantly at the Holiday Inn television with mouths agape, shell-shocked, knowing full well that G and Z would start their preliminary grunting and fidgeting around at five in the morning…yet nonetheless unable to sleep.

This experience has confirmed my long-standing hunch that traveling with kids should henceforward be referred to not as vacation, per se, but as “tripping.”

The day we got home, I was thrilled to see an article in the local paper about a child in a neighboring town with autism who was graduating from high school and exploring his next steps. I expected to learn about resources in our community and people with whom I might connect. I began to feel sick to my stomach as some of the language in the piece sank in: “trying to determine what was wrong with her son” was the phrase I still cannot shake.

Language around disability is so loaded. Labeling and differentiating language may be useful in accessing services and, in some contexts, increasing understanding. But great care must be used. Although all those involved in the article must have meant well, I remain disappointed by the overall implication that there is something about people with autism that needs to be “fixed.” Such language might fittingly be used in some cases of attachment disorder, an often dis-abling condition that results from difficult circumstances and which may, with luck, ultimately be healed. Autism, in contrast, involves – among other things -- different ways of perceiving, processing and interacting with the world. These modes may well be held as equally valid to those of neurotypical individuals.

Maybe this is not the current mainstream, on-the-streets perspective? After all, there is a vast spectrum of variety in perceiver and perceived...especially with children who are remarkably hard to miss.

Two new spectra coalesced from watching G and Z interact with strangers during our trip.  For G, a spectrum of tolerance emerged; for Z, one of engagement. 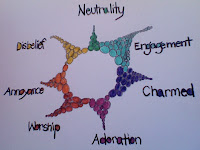 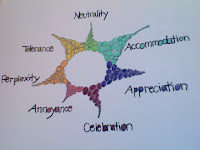 Adults tend to be engaged and/or charmed by Z. It can take quite some time before they realize – if they ever do – that they have been embroiled in a long, in-depth discourse with someone barely three feet tall and six (“six and a half, Mama!”) years old. This stage we will refer to as “disbelief.” Her relentlessness sporadically results in annoyance and more or less successful attempts at extrication. More frequently she is adored, even worshipped, for the tiny deity that she is. Obeisances are offered and accepted. Thanks will be proffered by Herself…if prompted.

The attachment disorder specialist with whom we are working recently told me that it is “harder for the really charming children to get the help they need because they get away with so much.” Z presents a scintillating exterior that diverts her adoring audiences’ gaze from her inner pain and her external transgressions. With inner healing, perhaps her dazzling shine will become more of a comfortable glow.

The general adult-stranger reaction to my aspergian son seems to be one of tolerance. More negative reactions to his sometimes over-friendly or otherwise inappropriate behaviors include confusion and even anger. On the other hand, a decent proportion of people will go slightly out of their way to accommodate him – and a select few seem to truly appreciate his openheartedness and originality. There are even those who seem to celebrate his free spirit and flailing body.

The spectrum of stances taken by his fellow children, they of lesser patience and knowledge, veers slightly more toward perplexity and annoyance. With both adults and children, however, I get a lot of questioning glances, raised eyebrows and rolled eyes. I try to deflect such unspoken queries both because (this is one of many things I have learned about myself in parenting a child with autism) most direct eye contact makes me uncomfortable and because I demand that G be accepted on his own terms.

After one particularly stressful day in North Carolina, Pardner wondered whether “everybody has to, in some sense accommodate G.”

I disagreed: “I think the people who get G really get him!  If everybody were like G, the world would be a much better place. But,” I conceded, “much, much messier.”

I suppose I fit into the celebratory faction. Unlike the mother quoted above, I have never thought for a millisecond that there was anything “wrong” with my son. Calling someone “differently-abled” may be a cliché, but it is also deep truth.  The gifts of truth and heart and generosity that come with G could never be compensated for by “normality.”

One of Rudolph Steiner’s first students was a boy with autism. Steiner came to believe that people with autism were partly still in the angelic realm. That is, their engagement with the mundane world was limited because of an ongoing partial immersion in another dimension, one closer to source/truth. Thus the calculations and deceptions of ordinary people are alien to those with autism.

Steiner remains a controversial figure. I both agree and disagree with Steiner’s stance on autism: for one thing, the word “angel” can be a polarizing one; for another, people with autism are as varied as those without it…Yet there is something to be said for such a positive view of this “disability.” Stay tuned: perhaps another spectrum or two is called for.

Whatever their religious, philosophical or personal status, those people who wholeheartedly accept all children are angels to us. Neutrality is fine too, though surprisingly rare.

Posted by Full Spectrum Mama at 9:51 AM