Many of our friends and family members are educators, and many care intensely about what is taught in our schools. I myself am a teacher. So I feel a bit disloyal and even heretical saying this: as far as my own kids go, I don’t care, like, even at all about curriculum.

Actually, I had always planned to homeschool my children, but circumstances conspired to bring me one child who doesn’t necessarily want but desperately needs all the socializing he can get and one who would probably go postal within three consecutive days spent with Mama and without major social activity. For Z, adult acolytes will do in a pinch, but peer adulation and goose-stepped errand-running is preferred; for E, the biggest school lessons are ones he doesn’t necessarily learn at home: that while everybody is different, most people judge others for being different; that we can’t spend all our time reading; that people change their minds and plans change; how to "read" unfamiliar situations effectively… 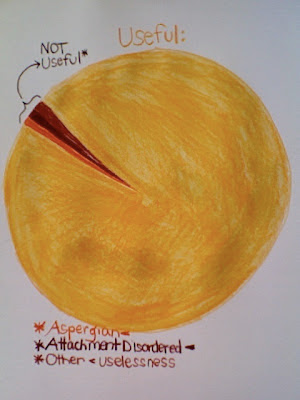 As this scientific pie chart demonstrates, most learners benefit enormously from a thoughtful, organized curriculum.  I contend that my children, along with certain others such as perhaps some gifted students, or some with significant delays or learning differences, do not. It’s not that curriculum excellence always impinges on these students or is a negative thing, it just does not matter as it would for other students. My learners gain most from teachers of exceptional character and eagle eyes. So I don’t particularly care if they spend a day chasing caterpillars in the meadow or making 3-D models of the Green Mountains.

In my ideal world, time spent on curriculum development (not to mention test-prep – another post!) might well be used to consider and research how to teach contentment or generosity or ways to encourage curiosity.

However, in this reality, teachers don’t have that kind of freedom, regardless of whether they would willingly toe the Full Spectrum line. So I care that -- insofar as possible -- my kids have shining morning faces and don’t get dragged down by awful beastly kids or dreadful, serving-time-until-retirement teachers.

G spends most of his time at home reading and learning thereby. At school, this direct absorption of knowledge is somewhat compromised by wide-ranging sensory and emotional overload.* In other words, much of his actual intellectual progress probably occurs at home.

Z isn’t too interested in books…yet. But she could efficiently extract all the necessary knowledge for an astronomical level of success from two potatoes, a rotten log and a maraca.

So, if not book-larnin’ and curricula, what can teachers offer such children?

What I hope for from teachers is:
1.     that they be kind, and
2.     that they model empathy,
3.     good judgment, and
4.     integrity; and
5.     hold an atmosphere where bullying is simply and absolutely not a possibility either for potential perpetrators OR victims.

1.     Kindness: I hope it is not too much to hope that the logic behind requesting kindness of elementary school teachers is a no-brainer.
2.     Empathy: Some non-autistic people SAY that people with autism lack empathy. This has not been my experience at all. G is the most softhearted person I know. I will say it is sometimes a stretch for him to understand what other people are feeling when his senses and neurons are feeling assaulted, but once G knows what's up he cares and understands and acts on those feelings. That is, he empathizes, often too much (so that his feelings become painful and he finds it hard to function...).  Z sometimes lacks empathy because she is in survival mode.  Teachers with healthy instincts for and expressions of this emotion offer lessons in positive, pro-social empathy that students can carry throughout their entire lives.
3.     Good judgment: discernment, moderation, discipline and common sense are elusive for G, optional for Z; as much as possible, they need to see them in action.
4.     Integrity: I want my children to see their most esteemed role models as people who follow their consciences and follow through on their word. In a classroom setting, this could be as plain as setting clear rules and consequences. When G kicked his cat because his cat knocked over his beloved fish’s tank and killed the fish, he felt guilty. I told him, “That was a natural thing to do – your cat will forgive you and you’ll do better next time.” When he told his teacher – a former Buddhist monk – about this incident, his teacher (in the context of an appropriate lesson for the whole classroom, in which many students apparently thought kicking a cat was funny) vehemently scolded him. I like that his teacher did this: he wasn’t trying to make himself popular, nor was he taking the easy, lame approach; he was speaking the truth as he knew it.
5.     No Bullying: some kids, like G, are more vulnerable to being bullied or, like Z, to being bullies. Both kinds lose in a chaotic classroom. When teachers hold the classroom space as a safe one, everyone wins. This fall, I finally had an opportunity to enlist Z’s strengths in a positive fashion. A little boy from her preschool had enrolled in kindergarten and right off the bat was getting bullied on the playground by some fifth grade boys. Z hasn’t got a bit of “victim” on and I knew that by her patronage alone, this sweet little boy would be safe. As well, her kindest instincts would be called into play in caring for this wee friend. Now I just hope those fifth graders are ok.

I spend my advocacy, that tacit, somewhat-limited leeway every parent has, on the above qualities. As long as teachers are decent people and in charge of the classroom we’re good. We have done very well so far – after all, why do people choose to become teachers? (Hint: it’s not the lucrative salary.)  I figure the clan can always learn “the new math,” but if their hearts are hurting that’s a MUCH bigger issue.

* Here is an example. At the end of fourth grade, G’s class had an end-of-school open house to share the students’ Native American projects.  There were So! Many! people in that classroom, and so many sights, bright lights and sounds to take in, that I began to get a migraine. Consequently, at this event, I could barely see people and when I could they made me nervous as I couldn’t even fathom or read what they were thinking and feeling in that context.  I had a compelling urge to flee.

Adding to that urge was the fact that G was wandering around aimlessly, talking loudly and constantly to anyone nearby without even looking at his putative listener to see if he was being heard.

Having cornered them in a relatively quiet spot, I asked his teachers, “Is he always like this in the classroom?”

“Pretty much,” they told me, with love in their voices, “Yes.”

With all due respect to G’s WONDERFUL teachers, HOW, then, can he LEARN?  I mean, I know he learns some stuff but there must be so much that is lost in the process!

On our walk home that day I shared that being in that classroom was very challenging for me.

“Is it challenging for you?” I wondered, casually.

“Is that why you talk a lot sometimes, and in a loud voice?”

Having been so profoundly overloaded, I was daunted to realize that this is what G and all students and their teachers deal with every day. I am sure many – most -- kids are able to navigate such environments quite well, but G is not one of them.

Barring private school or a “separate-but-‘equal’” classroom for those with sensory and other neurological and/or emotional differences, what can one do to mitigate such overwhelming environments, with so many people, visual and aural and other stimuli, social and academic expectations to be met…??? How can students with sensory integration issues be effectively integrated in the classroom? If help is needed in the classroom, how can we de-stigmatize that help?

Posted by Full Spectrum Mama at 10:21 AM