I. Far From the Tree:

For a variety of reasons, it wasn’t until my second year of college – when I fell in with a diverse bunch of women from intact families who remain among my closest friends - that I realized that many families are happy ones. Oh, I don’t mean perfect, but…in the balance…happy.

In retrospect, in a very real way it was I who caused the unhappiness in my family unit. Perhaps if they’d had the knowledge we now have around neurological diversity and Asperger’s syndrome (I know, I know, autism spectrum disorders), they’d’ve coped better with my obsessions, my ideas about justice and fairness, my literality and hypersensitivity.

My teen obsession with King Arthur, Queen Guinevere and the Lady Morgan le Fay made me think I lived not just with the wrong family but in the wrong era. What I saw as truth, honor and nobility was called “judgmental” or “black and white thinking.” I informatively let my family know, on the regular, what I thought of their [normal, neurotypical] values.

With more knowledge of differences my family might’ve known how to address my deep feelings of betrayal at the alarmingly wide variety of turns of events that felt to me like lies and injustice:  if people didn’t do just what they said they would, or bent the truth, or acted unfairly, or didn’t get the right consequences for misbehavior I was devastated. But they didn’t, and we weren’t – happy.

We weren’t a natural match.

By now, most of us in my family have figured most of this stuff out [Hi mom! Not your fault! Different era!], but as Andrew Solomon shows at length in Far From the Tree: Parents, Children and the Search for Identity, families with major internal differences struggle to accept and understand each other.

Which brings me to my daughter. I habitually find myself thinking as to how we’d be one of those normal (-ish) happy families if only Z would just stop acting out.

Having been the “problem” in my family, I never want my daughter to feel that way – consciously or unconsciously.  I am sure she does, though. Here is one little way I am trying to change that.

II. Holding hands in the past:

Typically, we’d be walking along and Z would grab my hand in what felt like a slightly aggressive way (maybe I’d be holding a bag or package, or have my hands clenched together for warmth, or in my pockets), because she’d decided she wanted to hold hands - pronto.

Then I, wanting to be a good therapeutic parent, wanting not to be manipulated (because that makes children with reactive attachment disorders feel scared, out of control and obligated to get even more manipulative), would remove my hand from hers.

After awhile, I would take her hand back, in an effort to show her both who was in control and that I was happy to hold her hand.

That was our sad little pattern. It felt pathetic, like I was/we were circumventing “natural” love and interaction with a series of control-related scenes, vignettes of mini-failures of affection. 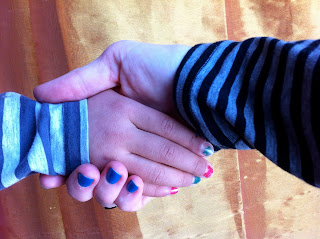 The funny thing is, the more loving I am able to act in our relationship --  in this case essentially via pre-empting Z’s demands -- the more I feel…loving!

As with my revolutionary (to me) hand-holding paradigm-shift, this loving-revelation might be a real “duh” sort of insight for some, but for this Full Spectrum parent very little is obvious. So much interaction is attributed to what feels instinctive, or comes “naturally,” yet I don’t believe in my heart that such reactions are based merely on genetic relatedness – or the lack thereof.

And another thing: People often assume I know what the “difference “ is between how one feels about a child who was adopted and a child who is biologically ones “own.”*

How can one distinguish between the love one feels for one’s children except insofar as it relates to that child, that person, as him- or her-self? I love each child with my whole heart, as anyone loves anyone they truly love…

What I do know: it’s challenging to parent children with autism and children with attachment disorders for very, very different reasons. It definitely makes you feel ALL the feelings.

As to the rest, there are only more questions: What if my child who was adopted had autism (somewhat similar to me) and my biological child had an attachment disorder (relatively dissimilar to me)? Would I still have the same reactions - the same instinctive understanding and empathy with G’s autism; the same chagrin and desperation around Z’s attachment disorder?

For clues, I look at the way people react to each.

With G, some children are cruel, or merely “tolerant;” the occasional adult is an ignorant so-and-so; mostly, once people get to know him, they see his huge heart and adore him.

I see that some of Z’s peers are intimidated by her; but most charmable humans are charmed by her and, eventually, yes, adore her.

As the major players in Z and G’s lives know, spend a lot of time with either child and you will encounter exasperation. The more attached Z becomes, the more she may test that connection; and G's listening and focusing skills are "developing at this time" (as they say on Vermont report cards). Chances are the adoration will continue apace. Plus, occasional exasperation with children is…normal, right?

It’s hard to imagine Z would ever be compelled to pluck my hand away from what it is busy doing because she wants to hold hands Right! This! Instant! if she’d been in my arms from birth. It’s taken longer to bond with a daughter who can be aggressive (powerful) and manipulative (perceptive), than it did with my son, a helpless newborn in the NICU.  What love has grown, though, is profound – perhaps the more so for being hard-won.

Every time I grab Z’s hand first it gives her some extra sugar and gives me hope, and, as Solomon says, “Hope is the engine of social changes that mitigate disability and difference.” **

Funny how that works.

** http://www.farfromthetree.com/hope
Posted by Full Spectrum Mama at 10:01 AM