Pardner grew up in predominantly African-American neighborhoods. I was born in Panama and grew up spending time in Panama City and the Darien jungle town of La Palma (and in the interior, in smaller indigenous villages), usually being the only white person around besides my father. My godfather was an Emberá Cacique (the Emberá are the indigenous people of that region; Cacique means chief). The population in La Palma consists largely of Darienistas – descendants of escaped African slaves.

So Z’s New England-based family is a lot less super-White-rooted than most two-White-parented families around these parts….But that still doesn’t quite explain why she thinks she’s Black.

Z was adopted from China and is of – so far as I know and can tell – entirely Chinese ethnicity. When she was a baby I often thought she looked as if she could have been Emberá, but this resemblance has diminished as she has grown older.  In any case, I’ve always made sure to have positive representations (books, music, art) of people of all shapes, sizes, abilities, neurologies, and skin tones around the house. I try to celebrate a variety of cultures and perspectives. My goal has been not so much to make Z aware of being special (because she is Chinese, or was adopted, or…) but to teach –sometimes without explicitly doing so – that all people are inherently valuable.

For example, here are her favorite dolls: 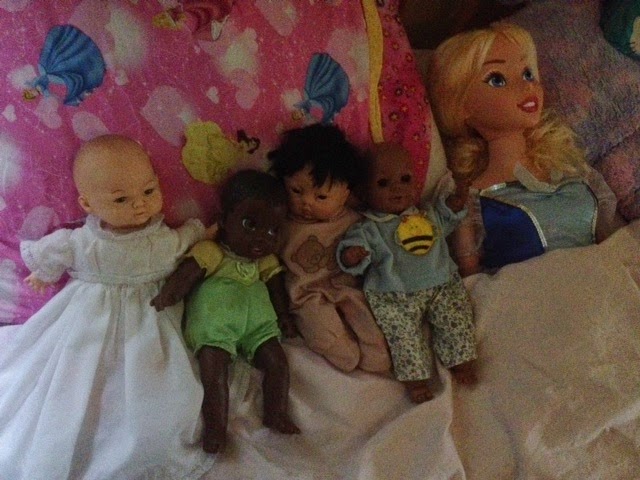 “Cinderelly,” far right, is a little hard to explain. Something involving Grandparents and a very headstrong young lady. Otherwise, as you can see, we have a very inclusive and diverse doll family. “Donna Poodle Itchy,” center, who is of Chinese descent, is Z’s favorite doll baby, but she loves them all. And, I suppose, feels ethnically connected with them all as well: she knows she is from China, her parents are White, and she is, apparently, Black-identified.

I’ve heard her telling people several times, “There were only two Black kids at [her old school]. Me and [Black person].”

And check out this Thank-You card she – who has warm beige-toned skin - made for her best friend, who is from West Africa and has very dark brown skin: 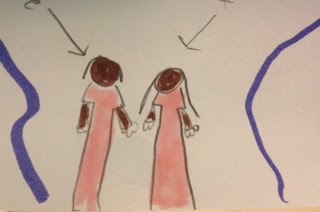 Figure II – Thank You Card (Self-Portrait by Z, with her Best Friend)

Many, many moons ago, I worked at a fabulous organization called New Jersey S.E.E.D.S.  with the man I (along with his four sons, and I bet a few others like me whose lives he’s touched deeply) am now privileged to call “Dad.”* There was a student in our program who was half Black and half Chinese and called herself “Blackinese.” I’ve never forgotten the pride this student had in her voice when she explained her heritage, nor the excellent word she used to encapsulate that heritage.

I’ve been reluctant to too-strongly correct Z on her identification with other people of color of (speaking generally) a different color because it does seem to be a very positive thing for her. She is privileged to live among many terrific role models of all sorts, and in a progressive, inclusive community where being a person of color is a plus (ideally, in my humble opinion, it should be a neutral, butanyway…).

So I guess she’s just Blackinese.

* Here’s what this wonderful man said when I asked him how he identifies himself ethnically as I began this post:

Jesse Washington once asked me to describe my race in six words. I answered, “Race is a fiction; I’m black.”

I do not say African-American because all of us come from Africa, some simply left the Motherland later than my ancestors did.  If we are simply African apes my ethnicity is special because I identify most with blacks worldwide.

Posted by Full Spectrum Mama at 10:07 AM