Every time we have a Silent Contest (a.k.a. “Mom’s only time to not hear talking all day”), G brings up the time his sister and cousin stole his french fries at a diner with his Full Spectrum Grandparents. Apparently, he’d been trying to win $2 in a table-wide Silent Contest (apparently, grandparents also like quiet moments), and was unable to protest the theft because of the need to be Silent.

So, naturally, he’d prefer NOT to have a Silent Contest, because he is still traumatized by The Incident. Which happened at least four years ago.

I tell this story because, well, I get it. Some of us with sensory processing differences are extremely sensitive emotionally as well as sensorially. And – whether through our senses or emotions – when we feel things, we feel them more deeply and intensely than the average person, so that sometimes they are unbearable…and sometimes they are unforgettable.

I think of it like grooves on a record (remember those? C’mon hipsters!): the original grooves are deeper, as they are more strongly felt; the grooves that remain over time are worn away more slowly, if at all, because of their original depth. Literally, though, it’s the neural connections experiencing and recalling these feelings/events that are more robust. This might account at least partially for G’s and my eidetic memories, with which we are able to visually recall whole swathes of text or things we’ve seen or heard (transformed into text, for me).

At the same time, the processing and memory space taken up by these strong feelings seems to preclude the remembering of – or paying attention to - whole other piles of things. We may seem flaky, or physically uncomfortable, or socially awkward. We may get lost – directionally or in other ways. Sorry!  Brain full!

When I was a little girl, every time I would get hurt I would say, “Hurtaself…AGAIN!” Even then, I associated pain with previous pain, and strongly recalled other injuries, because they really, really hurt. (I remember{ed} the good stuff too – that’s now one reason I remember to write thank-you notes! – but that’s another story.) 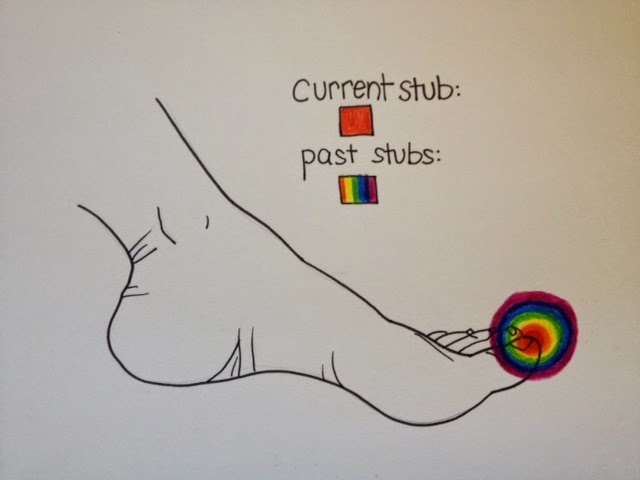 Think I’m being dramatic? Last year I had one of those cavities where you chew the wrong way and you fall down in agony before even having the time to think about it. I went to a local dentist and he could not numb the tooth. I went to an Ivy-affiliated dentist several hours away who was likewise unable to numb the tooth. The fancy dentist told me my tooth was “enervated,” meaning that the nerves associated with the tooth were many and widely dispersed and thus it was impossible to eradicate the feeling in that tooth. I would need to go under general anesthesia to get this tooth fixed (both dentists were able to put temporary “band-aids” on the tooth).

Enervated. In general terms it means to make weak or lessen someone. But in teeth it results in Feeling More. That sounds about right for just about everything in SPD land.

An InLinkz Link-up
Posted by Full Spectrum Mama at 4:02 AM