CAN I SLIDE DOWN THIS?

Leaving Pardner’s basketball game at the rec center, G – who has the balance of, um, a person without balance - casually threw a leg over a slippery metal pole and was about to slide down the skinny handrail that hung over a three story stairwell.

I was about ten feet away, attending to his little sister, when I heard him ask, “Can I slide down this?” Quicker than one would think possible, I was at his side and pulling him off the railing. I pushed him against the wall where he would be safe. I felt a surge of adrenaline such as I’ve rarely if ever felt before and only at great effort prevented myself from punching him.

My voice, when it came out, didn’t even sound like me. It sounded like a very hoarse man: “DID YOU LOOK??? DID YOU? DID YOU SEE THAT YOU WOULD ALMOST DEFINITELY HAVE SLIPPED OFF THAT RAILING AND DIED???”

Here is a picture of the stairwell I took when we returned to discuss this again: you can see the kids’ heads and shoulders waaaay down there. G asked, from below, “Do you want me to pretend I am dead?” 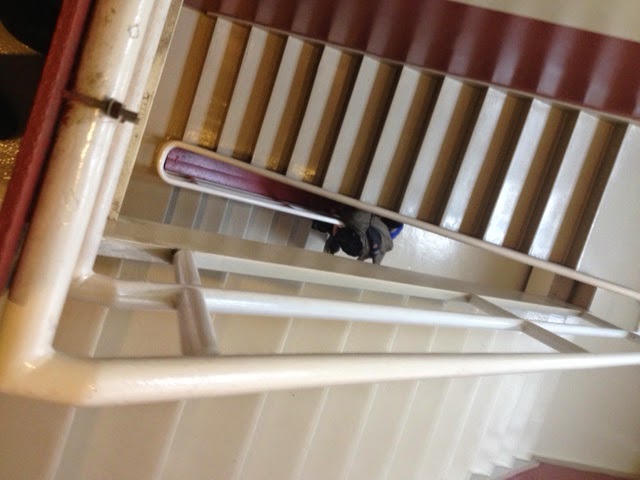 I've written before about trying to get G to Pay Attention to the World. I can’t say my lectures around his almost sliding into oblivion (or, at least, severe injury) felt groundbreaking. But, since it is clearly so incredibly, desperately beyond important, I tried: “You need to think before you act, [G]. Remember how I have been asking you to pause when you leave school and close your eyes and think if you’ve forgotten anything? Well you need to do that much, much more. Like, whenever you are about to do…anything.

“It’s not that something’s wrong with you that makes it necessary to think before you act.

“Everybody has to think before they act.

“Your sister. in particular, has to think before she speaks. Because she talks a lot and sometimes says sassy stuff. But you need even more to think before you do something, like cross the street. Most people already DO THAT. But you don’t.

“You could have been dead yesterday. Look at my face. Can you imagine how we would all be feeling today if that had happened?”

Unfortunately, I don’t feel like he’s really listening or grasping the impact of my words -- or the possible repercussions of his actions. He’s one of the smartest people I know, yet I still honestly have no idea how to teach him common sense in a way that sticks.

Later in the evening Z was doing her usual acrobatics on the living room rug and G said, “[Z], you’re a calamity waiting to happen,” and I laughed – laughed! – “Look who’s talking!”

“Well, mom, a calamity is also a great disturbance in the atmosphere…”

I think I am still calamitized. To see your child almost off himself in the silliest, most-preventable of ways is pretty devastating. Even more devastating: not knowing how to ensure it doesn’t happen again in a slightly different, potentially highly-avoidable way.

But we will keep trying.

I am so grateful this Thanksgiving that G is still alive, in all his huggable glory.

I am grateful for another chance to try to help him to gain some goldang sense.

Posted by Full Spectrum Mama at 8:10 AM