Are you and/or your child(ren)…”different”???

As a child I didn’t see difference as significant. I think I noticed that people had different skin colors, genders, ages, spoke different languages, etc., but none of these distinctions held weight for me.  This was partly because I grew up in diverse environments (Panama and the Bronx, then Westport, CT), and partly because my brain has always been a tidge you-know-what.

I’ve been thinking lately about how the ways we and/or our families and/or loved ones differ from the “norm” actually change and have different repercussions and benefits over time and in different contexts.

When my son G, who is on the autism spectrum, was little, “what not to say” would have been, well, just about anything since I personally - unlike, um, every teacher he ever had -  thought nothing was “different” about G; in elementary school, our biggest challenge was getting G the support he needed (and, at times, avoiding support he didn’t need).

Now, I dread people telling me “So, G will be getting his Learner’s Permit soon.” Um, no? And could you not bring that up with him, please? I watch my friends with kids G’s age rejoice in their increasing freedom, knowing their children’s paths will differ in significant ways from my G’s, and I have mixed feelings: glad to have my dear child around longer, isolated, sad about that lost freedom, worried about his future, super proud of him just as he is…

(Please note, statements like, “Oh, every kid does that!” or “Every parent worries about their child’s future” - meant, probably, to be reassuring - are usually on the “not to say” list. It’s not the same. We know our kids, we know what their challenges are, we know the Full situation, so…)

With my daughter Z, who has struggled with an attachment disorder, what has gotten me all along is when people judge my parenting (they tend not to judge HER because she is so. dang. charming). Therapeutic parenting for attachment disorders is super strong on boundaries in a way that is anathema to most of my crunchy, progressive community. For most of Z’s life, I’ve suffered when I’ve felt that people were blaming me for my daughter’s rages and tantrums. Now, I cringe when people indulge her when she is in fact testing and manipulating them.  I cringe when I have to intervene in ways that seem too strict to people who have not wrestled with attachment disordered behavior in their families…

And she - smart, tough cookie - totally knows both how to work it and why I act as I do. After she’s done being mad, she appreciates my efforts. But I know there are plenty of parents who think I’m a so-and-so. Now? I don’t care so much. Before? Yeah, that was hard. So that’s a change…

More changes: My son’s learning differences seemed to impact him most early on. They are still a major factor, as he is still in school (and they will remain something of a challenge his while life since his learning differences have non-academic implications as well), but as he moves out into the wider world his social and developmental differences may become more significant. My daughter no longer explodes in public, but she’s still contending with a need to control her environment that sometimes causes less-than-healthy behavior. As she grows up, I can see ways in which this may even become a strength, though I worry about anyone who tries to oppose her!

I guess what’s now really sinking in is that I thought once I knew there was something different about myself/G/Z, we would get a label and figure everything out and that would be it. No. And also? Labels change: Since G’s diagnosis with Asperger’s about seven years ago, Asperger’s has been officially folded into the Autism Spectrum Disorders (I say “Differences”!!) diagnosis.

Even our understanding of labels changes as we see how individual ways of being, thinking, acting manifest over the days, weeks, months, years; as certain labels and conditions are added into the mix, and/or others are removed; as one issue that felt all-encompassing is replaced by another - or by a period of relative stability and ease…Over a lifetime, difference plays out differently. We learn and make mistakes as we go along.

Sometimes we underestimate or limit people based on prior abilities, and it’s important to remember that we all - no matter our labels/diagnoses/challenges/disabilities/abilities - have the capacity to grow. 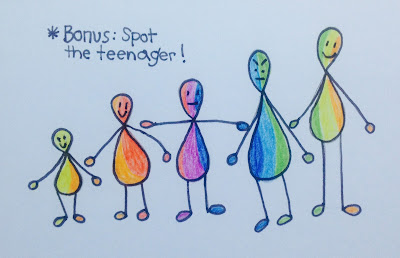 I wouldn’t trade either of my kids for any other, less-different child for all the world. Like most other parents, I happen to think they are the two bestest kids on this planet. At the same time,  they are not special snowflakes to be sheltered and protected from everything, especially now that their differences differ differently because they are growing up. We’ve learned that these differences make some things harder and some things easier for them, and, together, we are finding ways of both celebrating and scaffolding our differences in ways that allow for growth and change.


An InLinkz Link-up
Posted by Full Spectrum Mama at 3:44 AM