WHAT'S THE BEST KIND OF PARENT? 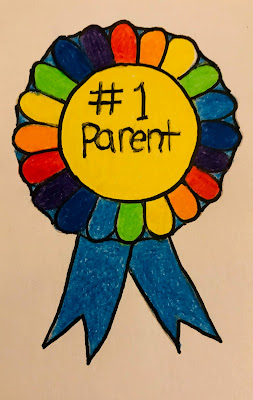 Over the years, I’ve mostly thought it’s been an advantage for my son to have a neurodiverse mom. But the other day, as I bumbled about, I for some reason was hyperaware of how much there is I don’t get, whether because it’s implicit, or because I see things in a black and white way…

Some things I see as unilaterally wrong (it’s hard to give a neutral-ish example without offending anyone), including stuff most people see as excusable under certain circumstances (lying) or even “normal” (eating meat). I don’t actually judge others regarding these things—see below about my self-perception as nowhere near that entitled—it’s just how I myself think and live.

Other subtleties and social niceties (and meanities!!!!) have only become obvious to me in my forties.

It wasn't until, oh, about five years ago, that I realized some people have other priorities in their logic besides kindness.

And I’m so literal that I didn’t even understand that being literal was a thing.

For a REALLY LONG TIME.

Another thing I’m finally realizing is that there are a lot of things I may not have understood along the way.

I knew from a very age that there was something different about me and my brain. To be more blunt, I “knew” there was “something wrong with me.” (This was unfortunately an impression that was initially created and then reinforced by those around me. It was, in some ways, a very different era.)

So I developed a lot of coping and passing (as “normal”) mechanisms. As an adult, I definitely pass as “getting” more than I get, and as (I hate this term, because it SO CLEARLY is a neurotypical one!) “high functioning.”

Still, how many people have thought I was a total wack job? How many times have I missed the deeper point of what someone was saying?

I know I’ve taken people’s words as unkind or marginalizing when they weren’t meant that way. By the same token, I’ve sometimes hung around people who didn’t want me around for way too long, or accepted cruel behavior (toward me) on the basis of my own self-determined inability to “understand what’s really going on.”

I guess I’m becoming aware that, for my son, having a mom who he can relate to and who understands his neurology definitely has its strong points. But it’s also probably hard for him that I'm “weird” or hurt or confused or clueless a lot of the time.

Also, he thinks I’m a total loser, so he’s not always pleased to hear about our similarities.

But there’s more. I found out I’m a Hufflepuff! [Non-Harry Potter fans might want to skip to the next paragraph.] All these years, I was cluelessly convinced I was a Ravenclaw/Gryffindor. In retrospect, I realize I was avoiding taking the sorting test because I was afraid it would reveal I was neither as clever (Ravenclaw) nor as brave (Gryffindor) as I held myself to be. Nope, I’m not. I’m a jolly, kindly, well-meaning, bumbling Hufflepuff.

So I got to wondering whether it might have been better for my son to have a parent who was more, um, with it. Someone who could better play by the (unspoken) rules and sort of…finesse things in a way that I, in my bull-in-a-china-shop way, cannot.

How often do I fail him because of my own neurodiversity and cluelessness? Would the best parent for him be someone who’s more savvy? Someone who’s more “successful” by real-world standards (which would include financially)?

Wouldn’t it be great if he had a mother who understood how to teach him to really be successful—in real-world terms, taking effective, reality-savvy steps—instead of a literal-bumbling-weirdo-Hufflepuff?

At the same time, I do know I love him exactly as he is and fight for him with all I’ve got.

I realize this is a false dichotomy in some ways. Plus, I'm not really addressing the many other parental concerns and diverse ways of parenting, not to mention parental situations, from marital status to economic status, ethnicity to gender identity...

But it still sometimes feels like there's this overarching and fundamental split between those who share differences and those who do not, one I continue to work to mitigate however I can (in our particular area of difference as well as others).

I imagine parents and loved ones who don’t “get” autism can probably relate from the other direction. Maybe they might not directly, personally understand why someone who’s neurodiverse can’t just “act like other people” or doesn’t perceive the world as they do.

But they “get” that world—and can navigate it way better than most of us with differences. So they can help their children or loved ones with differences figure out how to get by in a world that’s not designed for them.

I finally figured out that, in this context, good parenting is about being open to learning and growing, being curious, being accepting. To bring all that together, trying to understand is probably what makes the best parent—along with love, of course.

Especially if you’re a Hufflepuff.


P.S. If you have a minute, consider answering some questions for a student at Drexel University who is working on a project about how much time parents of children on the spectrum spend on paperwork. Find her survey here. (I am in no way affiliated with this, but was asked to spread the word. Drexel actually has an apparently awesome program for college kids on the spectrum, BTW.)


You are invited to the Inlinkz link party!
Click here to enter
Posted by Full Spectrum Mama at 3:58 AM