Two weeks into this semester of Comparative Religion, a student called out at the end of class, “Dr. [Full Spectrum Mama], this is kind of a funny question but…are you [G]’s mom?”

It turns out that this fellow was one of G’s counsellors at a wilderness camp he attended this past summer. Because they hike up into the woods for camp, I hadn’t met some of the counsellors (the ones who were waiting mysteriously up at the Hogan every day).

My student, having watched me for two three-hour classes, said I “look and act exactly like [G],” so he “just had to ask.”

This gave me so much hope, because I am – despite my differences or because of them or some mixture thereof – totally fine. I don’t worry about me. But I DO worry about my son. And sometimes people think I over-identify with him, but this is because 1. I get him – profoundly, and, 2. I want him to be okay in the end, as I am.

I always tell people I was almost exactly like G at his age, but female, and people who’ve known me only as an adult don’t believe me, basically because they think G is  “more autistic” than they think I would have been. But I know, and I remember.

Heck, forget being “okay like I am” I would like to see – and do, often, see – G as being okay in different ways. And I would love for G to surpass me in the neurological department and anywhere else. Isn’t any parent glad to see their child out-do them? It seems like that would be a very visceral survival thing. Differences are welcome and celebrated in our family as well! When I see Z shining in her acrobatics class, doing things I can’t even imagine doing, I am beyond proud.

In addition to neurological and physical differences, we need to take into account temporal differences: when people presume that G will stay just as he is, rather than growing as I have and then some, I find it highly botherous.

In any case, G’s strengths and challenges resonate deeply with me, though I always try to respect his separateness and unique personhood. I currently am having an opportunity to distinguish between us in a major capacity, because…

The beginning of Middle School has been a breeze.

…Did I even just write that?

I have spent the last two to twelve years (depending on how you measure it) worrying about Middle School for my son -- at first because Middle School is usually dreadful; later, and in this mode much more assiduously, because of his social challenges.

Seventh grade was a low point in my life. There are a variety of reasons for this, but my social challenges would rank up there near or at the top. I was so painfully shy in my new school that I was unable to say hi to people. I didn’t want to insult them by implying that they knew me. But people took this as my being snobby! And that’s just one example!

Trust me - it was ghastly.

G has had some challenges, to be sure. The adjustment to lockers was…epic, and most of my concerns in Middle School Prayers remain relevant.  But the bottom line is he walks out of school every day waving casually: “Heeeeyy, so-and-so,” “Yo, dudette”…And people…reply?

Is Middle School better than it used to be? How can isolating children in one place at their most antisocial, brutal stage, while combining students from several elementary schools so that they are naturally forced to jockey for position and, therefore, usually, inclined to identify scapegoats, ever be good?

My seventh-grader rates every day an 8 or 9. His innate positivity?...Cluelessness? New and improved brand of Middle School?  I’m surprised – but I’ll take it!

As G headed to school today, his hands were wrapped in a homemade “Mega Master Mega Evolution” Bracelet for his imaginary Pokemon (Figure I).

Figure I - "Hey Pokemon fans out there: this is [G], the Mega Master!" (Caption courtesy of G) 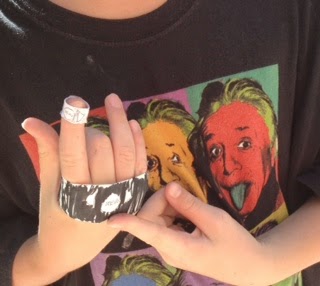 “No way, mom. [Friend A{awkward, sweet guy}] and [Friend B{goofasurus maximus darling boy}]* will like it, and I don’t care about anybody else.”

I am so proud, and relieved beyond measure. Now what should I think about?

Posted by Full Spectrum Mama at 5:56 AM